On Friday, it was announced that Hamas had agreed to a long-term ceasefire deal with Israel, as proposed by Egypt. Israel’s security cabinet met on Sunday to discuss the deal. What they decided, however, is not at all clear. 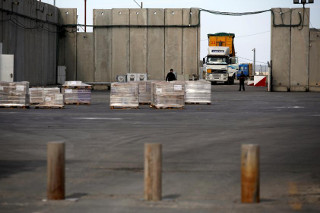 The official statement after the meeting declared the military to be ready for “any scenario,” but provided no indication that Israel was either favoring the ceasefire deal or the alternative, with Transportation Minister Israel Katz said was war.

Israeli officials do, however, seem keen to demand Hamas fulfill the obligations that are supposed to kickstart this deal, including ending all protests at the border, and all incendiary balloon flights. Israel maybe open to slight easing of the blockade for all of that, but it’s not clear they’ll allow it to progress to a bigger deal ending the blockade outright.

The long-term deal is supposed to give Gaza access to a seaport and airport, albeit in the Sinai Peninsula, as well as a power plant. It would also involve permanently opening both Gaza’s border crossings to Egypt and Israel.

That’s an awful lot of improvements to the human rights situation in Gaza, and some of them aren’t directly and permanently under Israel’s control. That appears not to be sitting well with some officials, and as soon as Hamas’ acceptance was announced, some Israelis were already complaining about the proposal to hold talks with Hamas on returning bodies of slain soldiers, insisting the returns should be a precondition to anything else.