Iran was very quick to spurn President Trump’s public offer of talks with “no preconditions.” Secretary of State Mike Pompeo was quick to revise this with a new round of preconditions, but that only positioned Iran’s reticence as a more savvy initial response. 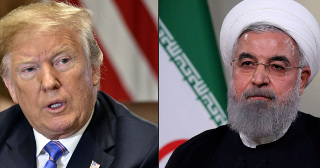 Still, Iran has been clear not to reject the idea of talks under any circumstances, and in leaving the door open can afford to wait, gaining more leverage as the party being pursued for talks, instead of willingly engaging under any terms they can get.

Iranian officials have emphasized as much, pointing out that Trump had already requested talks with President Rouhani eight different times before the public statement. Iranian officials said they made clear such talks would not happen in an environment where the US is threatening them, and seeking “one-sided talks.”

With President Trump making his desire for talks public, he is in the role of the pursuer, and trying to court Iran into coming to the table. This is a much different tone than in May, when Trump unilaterally withdrew from the P5+1 nuclear deal amid international calls for him to try to work something out. The leverage Trump had when he was party to the deal and threatening to leave is gone, and now he needs to make it worth Iran’s while to consider any new talks.

12 thoughts on “Rejecting Trump, Iran Leaves Room for Future Talks With US”