President Trump surprised many on Monday when he announced his willingness to meet with Iranian President Hassan Rouhani “without preconditions.” Within less than a day, the administration had already started attaching substantial preconditions to the offer. 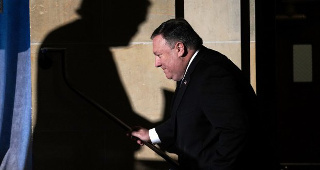 Secretary of State Mike Pompeo, early on Tuesday, began establishing preconditions, saying that Iran needed to commit to “fundamental changes to how they treat their own people, reduce their malign behavior, agree that it’s worthwhile to enter into a nuclear agreement that actually prevents proliferation.”

These preconditions almost certainly make the offer impossible, as the US treats Iranian foreign policy as necessarily “malign behavior,” and Iran is neither going to agree to deeper isolation, nor to the need for another nuclear deal while still trying to preserve the one the already signed, and which the US dishonored earlier this year.

Iranian officials were skeptical of this proposal from the moment Trump made it, and senior Iranian officials issued a statement saying they considered the offer of talks ‘worthless,” as Trump’s words contradicted his actions.

Some Iranian civilians were reportedly calling for Iran to accept the unconditional talks, seeing it as an opportunity. With all the conditions subsequently added, however, it’s likely that the Iranian government’s reticence will seem more well-founded to a public eager for a diplomatic path to normalization.

The quick sequence of events leaves open the question of whether Trump’s offer was ever intended to be taken seriously at all. Rather, it appears to have just set the stage for another round of Pompeo reiterating his anti-Iran talking points from recent speeches, only now couching them as demands.

101 thoughts on “As US Adds Preconditions, Iran Rejects Offer of Talks”