Top generals from North and South Korea are to meet Tuesday in the truce village of Panmunjom on various details of how the two nations can reduce military tensions along the demilitarized zone (DMZ). The agreement to ease tensions was reached during a previous summit. 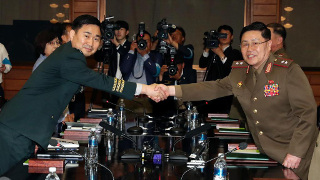 The generals are working on specifics, and that’s likely not to include any hugely unexpected concessions from either side. The number of military guards in Panmunjom may be reduced. Both sides are expected to offer to reduce the number of military posts on their respective sides of the DMZ.

Perhaps the most impactful issue that will be discussed will be the positioning of heavy weapons along the DMZ borders. Both nations are expected to offer to remove some of those heavy weapons, like artillery that threatens to do massive, immediate damage if a war breaks out.

While summit meetings between Kim Jong-un and South Korea’s President Moon Jae-in have made great strides toward a peace deal, the actually military changes along the DMZ have been minimal so far, mostly things like removing loudspeakers that have very visible effects. The huge forces on both sides of the border remain, however, and it’s going to take a lot of negotiating to dial those down to a more reasonable level.