On Thursday, national security adviser John Bolton called a cabinet-level meeting of the Principals Committee on the question of US policy toward Iran. The meeting included a number of top officials, including the secretaries of state and defense. 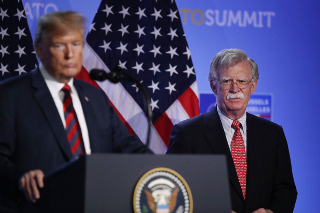 This comes after President Trump’s Twitter threat against Iran, and subsequent warnings from Iranian officials that they are prepared to defend themselves, warnings that have also been perceived as threats in their own right.

The administration appears to now be asking themselves, after Trump’s Monday threat and Wednesday suggestion that he’s ready to make a deal, that they need to come up with an actual policy on Iran. White House officials aren’t saying what they decided on.

Reports out of the Wall Street Journal suggest that a “limited” military option may have been discussed, though officials continue to insist they aren’t interested in regime change.

Even the possibility of a diplomatic deal needs more fleshing out, as while Trump has said he’s ready to make a deal, officials don’t seem clear on either what the US would expect out of a new Iran deal, or what they would offer in return. That’s going to make diplomacy very complicated.