On Tuesday morning, Israel fired two Patriot missiles at a Syrian Su-22 fighter-bomber jet along the frontier between southern Syria and the Israeli-occupied Golan Heights. The plane was shot down, and at least one person was killed. 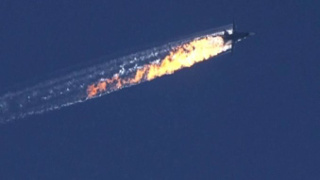 Israel says the Su-22 entered their airspace, and that it amounted to a violation of the 1974 Golan ceasefire. The Syrian government says the plane was in Syrian airspace when targeted by the Israelis. Some Israeli military officials suggest that the plane may have unintentionally crossed the border briefly, though it ultimately crashed inside Syria.

The Su-22 was believed to have been among the Syrian and Russian planes targeting ISIS-held towns along the frontier. Israel has generally not interfered in fighting against these ISIS remnants, but claim they had to shoot down the plane because “that’s what any other country will do in a similar situation.”

Su-22s are an export variety of Soviet variable-sweep wing jets from the 1970s. The planes are mostly used for dropping unguided munitions, and have common in airstrikes against rebel-held territory across Syria.

The pilot was reported killed on impact in the shoot-down. Israel claims only one person was aboard, though other reports suggest there was a second crew member, whose fate is uncertain.

6 thoughts on “Israel Shoots Down Syrian Warplane Along Golan Frontier”