Doubling down on President Trump’s late-night Twitter rant threat to make Iran “suffer consequences the likes of which few throughout history have ever suffered before,” National Security Adviser John Bolton says President Trump had spoken to him in recent days about his intention to take action. 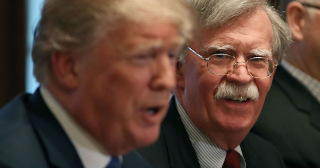 Bolton says Trump told him that the next time “Iran does anything at all to the negative, they will pay a price like few countries have ever paid before.” Bolton has been advocating US wars against Iran for many years.

And while neither Trump nor Bolton explicitly said that what was going to happen to Iran was a US military attack, that was clearly meant to be the implication. Bolton in particular would almost certainly not seem so satisfied with the plan if this was something short of war.

Many analysts are comparing President Trump’s recent comments against Iran to last year’s threats against North Korea, which preceded a diplomatic deal. Whether this is an attempt to replicate that in Iran, or just a threat for its own sake remains to be seen.

25 thoughts on “Bolton: Iran ‘Will Pay a Price’ for Any Negative Actions”