Friday protests in the Gaza Strip led to fighting in the evening, and as in previous weeks, Egypt and the UN stepped forward to negotiate a ceasefire. As of early morning Saturday, the ceasefire is holding. 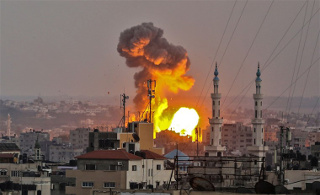 Israeli forces firing live bullets at the protesters killed one, and wounded 120 others. Snipers on the Gaza side killed an Israeli soldier. This was followed by a flurry of Israeli strikes across the Gaza Strip killing three more Palestinians.

Protests on the Gaza border have been a weekly occurrence on Fridays for the last four months. Israel has positioned military snipers at the border, firing on protesters throughout, and has been threatening to invade the strip outright in recent weeks.

Indications are that much of Friday saw Israel’s security cabinet holding meetings debating on how much to escalate the fighting. Ultimately, this ceasefire once again preempted that, but for how long is anyone’s guess, as these ceasefires have been very temporary recently.