In a Tuesday night interview, President Trump once again stirred up fury among NATO nations, this time by questioning the wisdom of the alliance’s collective defense terms. He warned this was potentially risky because any small NATO member could quickly escalate the entire alliance into a world war. 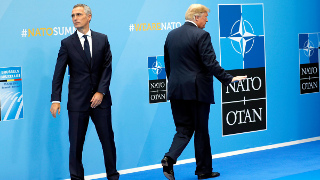 Trump provided NATO’s newest member, tiny Montenegro, as an example. A nation of just 630,000 people, Trump warned “they may get aggressive and congratulations, you are in World War III.” Trump added that this was “very unfair.”

This is of course true, and not just of Montenegro, but literally any of NATO’s member nations. While Trump’s terming of Montenegrins as “very aggressive people”didn’t sit well with many, the potential for one smaller NATO member nation to provoke a war is not some new concern, but a frequent criticism of the NATO model for decades.

NATO officials were quick to criticize Trump, saying that NATO’s Article 5 provision for collective defense is “unconditional and iron-clad.” This only adds to concerns among NATO nations that Trump’s commitment to the alliance is by their standards imperfect.

NATO officials were already unhappy with Trump going into last week’s summit, and more so coming out of it. The latest comments are a reminder that the threat of World War 3 remains a serious concern for the US president, and one not easily dispelled.

Montenegrin officials were quick to fire back that they don’t intend to start any wars. Again, this misses the serious concerns of the alliance’s obligations, as NATO has no shortage of members liable to pick fights and then come running to the alliance for “defense.”

It’s not even just the current members of NATO. The Senate Foreign Relations Committee has voted to express its support for “all” nations to join NATO if they want to. This means effectively any nation in the world with an axe to grind might join NATO with an eye toward using the alliance as its backup.

Trump is right in recognizing the dangers of NATO collective defense, something previous presidents have been loathe to publicly discuss. Yet in doing so he’s once again riled up angered foreign officials who didn’t like him in the first place.