A joint US-Afghanistan offensive against ISIS forces in Nangarhar is just about to wrap up. The Afghan government is optimistic. The US, however, is increasingly skeptical about its ability to defeat the ISIS affiliate there. 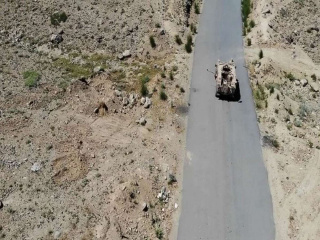 Gen. John Nicholson, the US commander in Afghanistan, says that the ISIS affiliate is increasingly resilient, with access to foreign fighters. On top of that, Nicholson warned, ISIS is getting funding and other general support from jihadist groups in several nearby countries.

This is the first time officials are addressing this issue. Afghan officials have declared the ISIS presence in Nangarhar to have been “wiped out” several times following offensives in recent years, and when that offensive wraps up, ISIS reemerges there, seemingly as strong as ever.

Before, officials just ignored the past, and were every bit as confident about their newest offensive. Gen. Nicholson’s comments show that there is at least some recognition that these offensives, while killing a lot of people, aren’t amounting to much.

3 thoughts on “US Commander: Afghan ISIS Resilient to US Attacks, Almost Impossible to Defeat”