Just days before his trip to Helsinki for his first summit with Russian President Vladimir Putin, President Trump tried to set a tone for the conversations t come, saying he views Putin as a “competitor” to the US as opposed to an enemy. 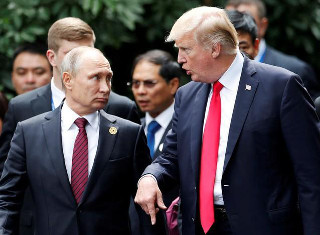 “He’s representing Russia. I’m representing the United States,” Trump said. “Hopefully some day, maybe he’ll be a friend. It could happen but I don’t know him very well.” This didn’t sit well with some other officials.

US lawmakers in both parties have made much of Putin being an enemy, and reacted with fury at Trump’s comments. Sen. John McCain (R-AZ) said America’s leadership in the world obliges Trump to confront Putin and hold him “accountable” during his summit.

European NATO nations have expressed serious concerns about Trump even meeting Putin at all. Comments from lawmakers suggest they broadly agree, and would prefer that, if Trump isn’t meeting Putin specifically to pick a fight, he not meet him at all.

6 thoughts on “Trump Says Putin Is a Competitor, Not an Enemy”