President Trump has come out of the NATO summit and his flurry of demands on NATO spending with a claim of total victory. He claimed in the wake of the talks “everyone has agreed” to increase their military spending because of him, putting the figure of the increase at $33 billion. 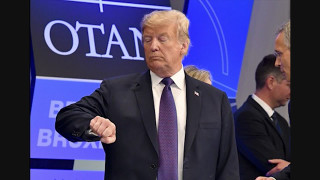 Trump’s version of events is that he told the alliance he was “extremely unhappy,” and everyone eagerly committed to boost spending beyond 2%. French President Emmanuel Macron denied this, saying the 2024 goal is basically the same as it always was.

Analysts also put serious doubts to Trump’s statement, saying they believe the $33 billion figure the president was touting came from the spending increases already committed to since 2014, not any apparent new spending pledges.

The latest NATO data also threw doubt into Trump’s claims that more countries are now meeting their commitments to spend 2% of GDP on military. The summit declaration did not point to any changes on that front, and it’s still the same five nations that were at 2% before the summit who are the only ones expected to reach it. Trump’s pledge that it will go “quite a bit higher” than 2% also appears untrue, as the NATO report mentioned no such changes in targeting in 2024 or beyond.

Trump went into the summit with everyone expecting him to a pick of fight, and while he absolutely did that, there is no sign it ended with him achieving any of the things he claimed. Rather, officials just seem glad to be done with the event.