A new poll for the DPA news agency is showing German voters are growing resistant to the current level of spending on the military in their country, as well as the number of US troops that Germany is playing host to. 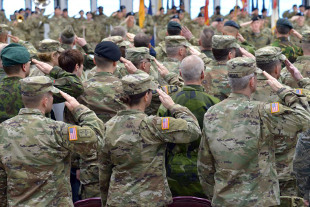 The poll shows that, even as officials fret President Trump threatening to pull US troops out of Germany, voters would welcome the US departure, with only a hair over a third of the Germans wanting US soldiers to stay. 35,000 US troops are currently in Germany.

Taken along party lines, Germans on both the left and the right were the heaviest supporters of the US withdrawal, with Die Linke voters overwhelmingly backing the idea. The ruling Christian Democrats are the least strongly in favor of the pullout.

Germans are not just sick of foreign troops, either. The poll showed strong resistance to Chancellor Angela Merkel’s call to spend 2% of Germany’s GDP on the military. Only 15% of Germans support that idea.

Indeed, not only did an overwhelming majority say that 2% is too much for Germany to spend, some 36% of Germans say that the nation’s current military spending, about 1.2% or $44.3 billion, is already too much as it is.

1.2% is at the low end of percentages for NATO members, but Germany’s massive economy means even that is enough to make them one of the top 10 spending militaries on the planet. Since Germany is friendly with every nation it borders, there is a strong case to be made that a lot of this spending is extraneous.

Since World War 2, Germany has committed itself heavily to developing a culture averse to large military spending and overseas campaigns. This has been a very good move, turning them into the economic powerhouse of Europe.

But as the US is finding out, this anti-militarist culture is entrenched enough that US pushes to dramatically increase spending are a tough sell to the ruling coalition, and completely unpalatable to the public at large. Germans don’t want a huge military, and the threat to withdraw US forces is no threat at all, as many would just as soon they left in the first place.