Adding to an ever-growing cast of foreign officials upset at the upcoming Trump-Putin summit, German officials from multiple parties are coming out to say they are deeply concerned at the planned meeting. 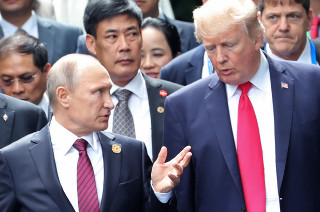 The concerns, as with previous nations’ comments, are that Trump is “too volatile,” and that they don’t trust him not to make an agreement on improved relations with Putin that other NATO members don’t support.

Peter Beyer, a top Merkel aide, told German media that they are concerned that NATO has not been included at any stage in planning for the July 16 summit. This further gives the sense among officials that they don’t have a good handle and Trump and what his intentions for the summit are.

On the other hand, Trump will be attending a very high-profile NATO summit in the days immediately before this summit, and almost certainly will be meeting some top officials to discuss the matter. While no joint planning has happened yet, it may be unfair of officials to accuse Trump of totally cutting them out.

Christian Linder, head of the Free Democrats, was a bit more direct, saying he just plain doesn’t trust Trump at all. He cited Trump’s positions on trade as proof his actions aren’t always in the nation’s long-term interest.

Ultimately, though, much of the suspicion surrounding the summit is, both domestically and internationally, a function of allegations of Russian meddling in the 2016 election. This started a narrative that Trump is effectively Putin’s “puppet,” which has retained a considerable following ever since.

Indeed, this suspicion of all things Russian is likely why this will be the first proper Russia summit of Trump’s presidency, and 18 months after his inauguration. All past suggestions of meetings were met with similar loud opposition.

But a summit was inevitable, as even if it’s politically risky and is going to spark a lot of upset feelings on the international level, the leaders of the US and Russia can’t simply not meet for years on end. Distrust of Trump will continue up to the summit, and likely beyond, irrespective of what understandings are reached there.

This distrust will also inform the perception of that outcome. Many officials operate under the assumption Trump is a diplomatic lightweight and that Putin is sneaky on an almost mythical level. Starting from that, they’ll necessarily see any deal as a win for Russia.