The remaining parties to the P5+1 nuclear deal, China, Russia, Germany, France, and Britain are all trying to save the pact since the pullout of the US. Whether they’ll be able to do so remains to be seen, but the joint effort is bringing the nations all closer together. 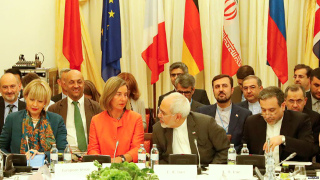 A Friday meeting in Vienna centered on saving the deal, and also provided opportunities for top-ranking diplomats from the various nations to hold closed-door, sideline talks. With the US having withdrawn itself from the deal, discussions on the deal are effectively now bringing everyone else in line, and facing the US opposition to the deal as a mutual problem.

The nations are not only in agreement about the need to save the deal, but seem to be heading in a direction which Iranian FM Javad Zarif called “practical,” in their united opposition to the US pullout from the deal.

No deal was reached Friday on what to do, and German officials say that the “full compensation” proposal for all firms targeted by US sanctions is probably not going to be possible to implement. That doesn’t mean they aren’t trying to find a partial measure to keep trade going.

French FM Jean-Yves Le Drian says he wants Iran to stop threatening to withdraw from the deal while negotiations on the economic package are ongoing, saying it is making the talks more complicated.

3 thoughts on “Efforts to Save Iran Nuclear Deal From US Bring China, Russia, EU Closer Together”