For the second time in the past week, talks between the southern Syrian rebels and Russia collapsed. Early Thursday, the talks were reported to have fallen apart, and almost immediately Syrian forces launched a flurry of intense airstrikes against rebels in the area. 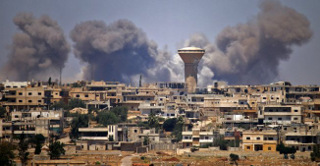 The Syrian Observatory for Human Rights confirmed the sudden flurry of strikes, saying that it was seen as “an attempt to make the rebels back down after they refused to subject themselves to the Russian terms for a ceasefire.”

As with a similar collapse of talks during the weekend, it didn’t last long. Jordan once again stepped up, and officials announced shortly thereafter that they’d agreed to return to the talks in the evening.

A major sticking point on these talks is rebel disarmament, and whether they will have to disarm all at once, or in stages as the talks progress. Russia is pushing an outright disarmament to quickly resolve the situation, while the rebels are loathe to give them up so fast.