The invasion of main Yemeni aid port of Hodeidah is on hold, as Saudi-led forces agreed to give the UN time to try to negotiate a settlement. That doesn’t mean fighting in Yemen is on hold, however, with forces shifting elsewhere along the coast. 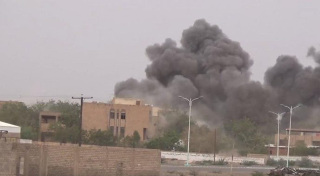 Focus off of Hodeidah, Saudi airstrikes were carried out against a number of towns further south, all of them held by the Houthi rebels, and all of them along the coastal road connecting Hodeidah to al-Mokha.

Details on what was accomplished in these strikes is unclear. Officials claimed a pair of Houthi “commanders” were killed in one strike, but there was no detail at all on most of the towns hit.

Airstrikes on Sunday and Monday were said to have killed 43 fighters, according to hospitals. There was no detail on the casualties from late Monday or any of Tuesday’s strikes. Saudi-led forces appear to be keen to keep up the pressure on the Houthis, even if they’re not in Hodeidah itself, and trying to weaken the rebels’ hold on the northwestern coast.