In new comments Tuesday, President Trump declared the talks with North Korea to be “going well,” saying that there have been “many good conversations” in recent days. He added that all of Asia is thrilled. 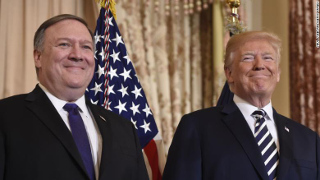 Trump’s comments come just days ahead of Secretary of State Mike Pompeo’s planned visit to Pyongyang. This will be the third time Pompeo has visited North Korea this year, and he is the top official to have gone there so far.

This comes amid a flurry of reports, sparked initially by NBC News, claiming a secret intelligence estimate that was scoffing at the idea of denuclearization. Trump did not directly address this report, but did say that the “fake news” was among the lone opposition to the North Korea deal.

Trump concluded “if not for me, we would now be at war with North Korea!” That may be an exaggeration, but not a major one, as a number of hawks had been beating the war drums throughout 2017 and early 2018, and have been unhappy with the diplomatic progress made by Trump.

One thought on “Trump: North Korea Talks ‘Going Well’ Ahead of Pompeo Visit”