More and more Israeli forces surge into the occupied Golan Heights these days, reinforcements dispatched with an eye toward fighting in the war across the frontier in neighboring Syria. 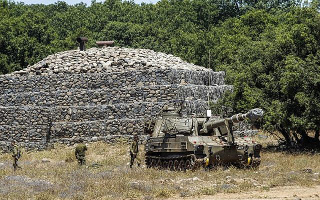 Officials say this is being done as a “message” to Syrian President Bashar al-Assad not to violate the demilitarized zone, where some rebels, and a lot of displaced civilians have massed. Israeli DM Avigdor Lieberman asked Russia to “warn Assad” not to violate the 1974 lines.

Syria is pushing south in an offensive against rebels in the southern Daraa Province, which borders Israel and Jordan. There was no sign Syria intended to go that close to the border at any rate, ad is trying to negotiate deals to get those cities back under government control without an offensive.

Israel has intermittently attacking Syrian government forces in southern Syria over “cross-border” fire, but generally Israeli strikes against Syria have just hit military targets around Damascus and Homs. Israel has said it’s a major priority to prevent Assad from winning the Syrian War, though it seems likely Assad’s government will survive.

10 thoughts on “Israel Boosts Military Presence in Golan, Seen as Message to Assad”