The US military has formally ended a 70-year presence in the South Korean capital of Seoul on Friday, with the opening of a new military headquarters further south in the city of Pyeongtaek. The US has had forces in Seoul since shortly after World War 2. 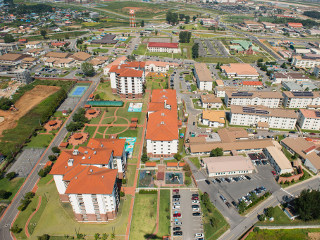 The new base is further south, and therefore out of the range of North Korean artillery. The relocation has been planned for some time, though the priority is clearly lessened with North Korea in talks to relocate its artillery, and peace talks underway.

Still, US military brass are presenting the new base as proof of a “long-term commitment” to South Korea, a commitment that may not have any practical justification if the peace process is completed. The base cost $10.8 billion, and US officials are emphasizing that the South Koreans paid 90% of that.

Pyeongtaek is a port city on the western coast of South Korea. The new base, Camp Humphreys, is intended to accommodate 43,000 people by the end of 2022. South Korean officials have said they are keen to keep a large US military presence in their country, largely believing it is an economic boon for the host city.