With a Syrian military offensive gaining ground and a large exodus of civilians out of the line of fire, reports out of Southern Syria’s Daraa Province suggest a ceasefire could be close to agreed upon. Jordanian sources are suggesting that Jordan is the driving force behind the effort. 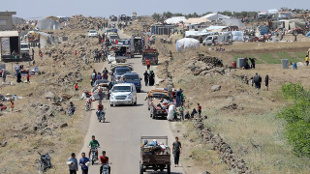 Specifics on the deal are scant, but it would appear to be a deal to stop fighting between Syrian Army forces and moderate rebels, with Jordan’s government backing it. Jordanian government spokesman Jumana Ghunaimat even addressed the plan in state media, sayig it would “protect civilian lives.”

Hezbollah Leader Hassan Nasrallah did not address talk of a ceasefire, but did cheer the success of the offensive in comments on Friday, claiming that a “big victory” is near and that the southern rebels are close to collapsing outright.

2 thoughts on “Reports of Jordan-Backed Ceasefire in South Syria”