With North Korea having frozen out Japan in its flurry of diplomatic efforts toward neighbors and regional powers, Japanese officials, particularly in their military, are expressing growing concern about US-North Korea diplomacy. 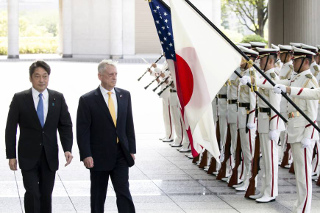 Defense Secretary James Mattis is in Tokyo Friday with the express job of trying to reassure Japanese officials that diplomatic progress with North Korea doesn’t mean anything to US-Japanese relations. Mattis said the alliance remains firm and “undiminished” by regional calm.

Japanese FM Taro Kono warned that Japan insists all sanctions remain on North Korea until full elimination of not only its nuclear program, but also all of its ballistic missiles. He told Mattis a “lot of things need to be worked on” before Japan would accept sanctions relief.

Japan PM Abe Shinzo has expressed interest in having his own summit with North Korea’s Kim Jong-un. North Korea, however, has said they believe Japan needs to stop its military buildup and large-scale war games to be in a position to be a suitable diplomatic partner.