Officials from the Saudi and UAE-led coalition attacking Yemen’s port city of Hodeidah are promising a “comprehensive plan” that they say will both protect civilians from undue casualties and ultimately provide aid to the population after the city falls. 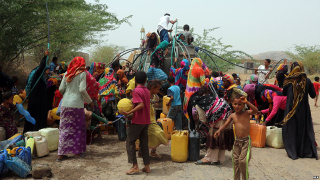 This mostly involves dropping leaflets telling the population not to resist, though UAE officials say truckloads of aid from the southern port of Aden are being sent north to Hodeidah to feed people in captured territory. Ironically Hodeidah is the main aid port into Yemen, though the offensive is making aid deliveries difficult.

Coalition officials say they are prepared to repair the sea port in Hodeidah after they capture it, if the rebels destroy it. This is clearly not going to happen, of course, but Saudi warplanes have destroyed parts of the port several times during the war, and it’s likely that as fighting gets deeper into the city, these airstrikes will do more damage.

Hodeidah’s civilian population isn’t taking any chances though, according to international officials. As the offensive moves away from the city’s outskirts and into populated areas, more than 30,000 civilians have already fled, with large numbers more to follow. Many are fleeing to the capital of Sanaa, but in practice most are just fleeing wherever they think they can escape the fighting.

Given how limited aid supplies are in northern Yemen, anywhere is risky for the civilians to flee to. Malnutrition is common everywhere, and if Hodeidah falls, much of north Yemen will have no source of food at all. UN officials have openly warned of a famine in that event.