President Trump has issued an executive order extending the state of national emergency against North Korea for another year. The order came with a written statement mirroring those from the previous year, declaring North Korea’s nuclear arms and policies as an “unusual and extraordinary threat to the national security, foreign policy, and economy of the United States.” 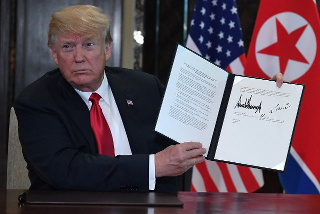 This of course stands in start contrast to Trump’s recent statements on North Korea, in which he declared the nuclear threat from North Korea to be over. This has left some speculating that Trump  is “flipping” on his position.

In reality, the statement going along with the executive order is practically a form letter, closely mirroring what is issued annually since the Bush-era as a justification to give the executive branch power to impose a series of sanctions on North Korea.

The Trump Administration has been very clear that those sanctions are staying in place until full denuclearization, something which they expect to take several years. That obliges them to keep the executive orders coming annually, even if justifying that requires issuing a statement that they neither believe to be true nor which reflects current policy. It is a dishonest statement, but not a shocking one nor necessarily indicative of any policy changes.