In an official letter sent to a large number of international human rights groups, US Ambassador Nikki Haley angrily attacked those organizations and said that their refusal to back US interests was a “contributing factor” in the US withdrawing from the UN Human Rights Council. 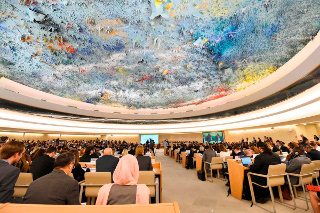 This centers on an attempt in late 2017 to push for “reforms” of the UN Human Rights Council, which centered chiefly on Haley insisting that Israel’s occupation of the West Bank be permanently removed from the agenda at the council. The main focus was barring the council from publishing a list of countries that do business in illegal Israeli settlements.

This reform never got much support and never happened. Several human rights NGOs, including some international groups that represent a large number of such NGOs, opposed the “reforms.” Haley was in particular furious about this opposition, saying it amounted to siding with Russia and China, both of whom opposed the plan.

Human Rights Watch UN Director Louis Charbonneau called the allegations “preposterous,” saying that the US was “attacking and blaming NGOs for its own failures.”  Human Rights Watch, along with Amnesty International, were major recipients of the letter.

It’s not clear what the motivation of sending this letter around was, let alone sending it to so many NGOs that it was virtually certain to be released to the public. The US had been threatened to withdraw from the council for years, long before this failed reform effort, and the bid to “reform” the council by preventing them from criticizing Israel was clearly never going to go anywhere. It seems unlikely the NGO involvement was anything more than incidental.