The three-day ceasefire for Eid al-Fitr in Afghanistan has come and gone. By all accounts it was a success, allowing fighters on both sides to safely visit family in places normally much too dangerous to enter. The fighting has resumed, but the Afghan government is looking at a much longer attempt at a truce. 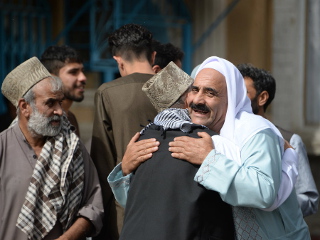 President Ghani and other Afghan officials, having failed at an offer to get the Taliban to accept another week-long ceasefire, are now floating an even longer open-ended ceasefire. The suggestion is that this could last as long as a full year.

Kandahar provincial officials are pushing hard for this ceasefire, which would be particularly important for them, given their capital is a main Taliban center. The deputy police chief says Taliban will be allowed into the area to visit relatives, and even officials without fear of being targeted so long as they come in unarmed.

Afghan officials have been eager to get the Taliban to the negotiating table, doubly so because they’ve been losing ground to the Taliban in fighting for some time. The Afghan government has less territory than any time since the 2001 US invasion.

The calm of Eid al-Fitr is a reminder of the peace that Afghanistan could have, and that has likely greatly bolstered popular support for a more lasting period of calm, leading to proper negotiations.