A three-day ceasefire for Eid al-Fitr saw Afghanistan enjoying a level of peace unseen in years. Taliban fighters and government forces celebrated together, shared meals, and got along. The ceasefire ended Sunday night, and everyone got orders to return to fighting. 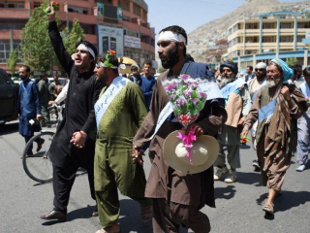 It’s a jarring shift to peace, and another jarring shift back to war. All the while, the fighters on both sides say their first ceasefire was a pleasant time, and that the people in general “were very happy with the peace.” Demonstrators even organized a peace march urging the continuation of the calm.

The success of the ceasefire, however brief, may inform what comes next. The hope was that it would lead to a boost for peace talks, and President Ghani even suggested extending it. The Taliban refused, but there is every reason to think that future ceasefires are possible.

Fighting was slow to pick back up after the ceasefire. The orders to return to war saw forces on both sides slowly and calmly leaving back to their respective front-lines. There was no eagerness to return to fighting, and the sense from those speaking to the media was, were it not for their orders, they probably wouldn’t have started fighting again at all.