Speaking to the Senate Armed Services Committee, Lt. Gen. Austin Scott Miller claimed that he was seeing “progress” in the US war in Afghanistan. He admitted, however, that 17 years of war “is a very long time.” 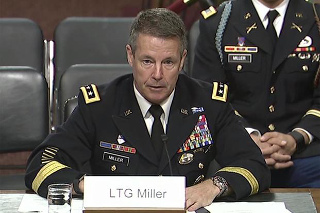 Lt. Gen. Miller is nominated to be the latest in a long line of commanders for the occupation of Afghanistan. Gen. John Nicholson, the outgoing commander, has also claimed progress recently, even though data suggests that the conflict has just gotten worse.

Still, Miller insisted that the war was in “the vital interests of national security,” and warned Congress that if the war was ended, ISIS would establish a presence and use the region to plan attacks against the US.

ISIS, of course, already has a presence in Afghanistan, established wholly during the US occupation, and which the US has proven entirely incapable of displacing. In fact, the Afghan government controls less territory now than at any time since the 2001 US invasion.

Miller, who is currently the head of Joint Special Operations Command, showed little sign of planning any changes in the war. Instead, he seemed to be eager to continue the 17-year-long narrative that progress was going to happen at some point in the future, while laying the ground work for blaming Pakistan when the progress doesn’t materialize.

10 thoughts on “New US Commander in Afghanistan Claims Progress, Warns Against Pullout”