President Trump made a surprise announcement Monday that he has ordered the Pentagon to establish a “Space Force” as a sixth branch of the US Armed Forces. He promised it would be “separate but equal” to the US Air Force. 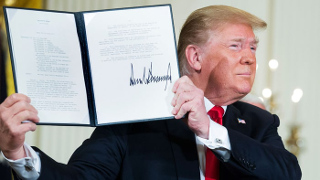 If that means equal in cost, that’s huge. The US Air Force is expected to spend over $160 billion next year, which is more than any other military on the planet spends. This would be an enormous increase in US military spending on space.

Trump has been talking up the Space Force for months, saying the US is going to be doing a “tremendous amount of work in space.” Trump now says the US will not only have a presence in space, but will “dominate” space.

Which is an ambitious place to try to dominate. Analysts have been warning of the danger of militarizing space in and of itself, and with other nations barely taking steps into space at all, the US doesn’t exactly have a lot of heavy-spending rivals to throw money at defeating.

The Pentagon, however, sees space as a venue for even more costly boondoggles. Untold billions could be dumped into any of myriad Space Force projects, with no existing metrics established on how to tell if the projects are a success or a failure.

Exactly how long it will take to establish Space Force as the sixth branch of the US military remains to be seen. Though the US has been ratcheting up space spending in recent years, a full branch would be wildly more expensive, and would require establishing a lot of new bureaucracy to manage this system.