President Trump has confirmed that the idea of establishing a “Space Force” branch of the US military is growing on him, even though he says the idea started off as a joke. He now says the idea makes a lot of sense to him, despite actively opposing such a move last year. 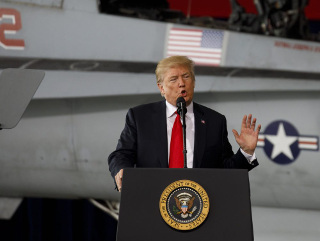 At the time, the House had proposed a “Space Corps” established as part of the Air Force, which was opposed as creating more layers of organization and bureaucracy. It was quite a surprise, then, when Trump told military members in San Diego that a “Space Force” could happen soon.

The Pentagon has been eager to dramatically increase its spending on military assets aimed at space, despite a conspicuous lack of other countries doing so seemingly meaning they’re creating a fighting force that has no conceivable opponent.

With a lot of money to be thrown around on space assets, it is likely there will be a lot of arguing over whether this will be an Air Force thing, or if it really is a completely independent branch of the military. Trump says the US is “doing a tremendous amount of work in space,” and that he believes a new force “could happen.”