The Israeli military is reporting that they are in the process of studying the legal implications of legally defining kites and balloons as “weapons.” This would be done so that they would have a legal pretext for shooting people in the Gaza Strip preparing to fly either. 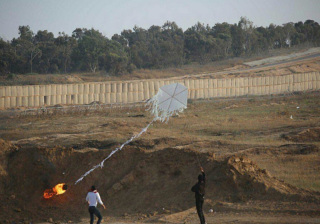 A series of incidents have occurred on the Israel-Gaza border where kites with incendiary devices attached were flown from Gaza over southern Israel. This was done to set fires, mostly to farmers’ fields, and has done substantial property damage.

Israeli officials have talked up killing those responsible. With the Israeli press claiming the Gazans are preparing a mass attack with “5,000 kite bombs” later this week, politicians are urging the military to act.

Israeli DM Avigdor Lieberman says it is “impossible to seal the sky,” but Israel is working on improved drones for knocking kites out of the sky. Shooting people on suspicion of being about to fly a kite would be a major escalation, and depends heavily on legality.