The Manbij Military Council, the Arab force that was aligned with the Kurdish YPG, have warned on Wednesday that they will not accept any Turkish military presence inside their city. This is going to be a problem, as Turkey seems set to move into the city. 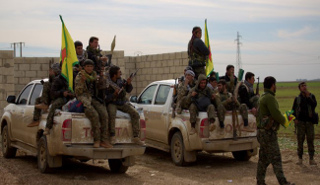 The YPG captured Manbij from ISIS with heavy US backing. Turkey objected that the Kurdish group should not control the Arab majority city, and has been threatening to attack it since. The US and Turkey made a deal this week agreeing that they, the US and Turkey, will share control over the city, and the Kurds will be expelled.

It appears no one consulted the Manbij Military Council, however, or the Arab administrators of the city in general. Officials say in the statement they’re still waiting for “clarification” from the US on what’s actually happening, and this is coming as Kurdish forces are already on the move away from the city.

From the YPG’s perspective this was likely a simple decision. They couldn’t hold Manbij away from Turkey without US support, and the US deal shows they don’t have it. What happens next is more of a concern for the locals, though clearly those locals weren’t asked or well informed about this process, and seem to be stuck with whatever the US decided for them.

Concern about the Turkey takeover shouldn’t be surprising, either, as Turkey is incredibly hostile toward the YPG, and will almost certainly treat the YPG’s (former) allies in Manbij as an unwelcome presence in a Turkey-administered territory.