In an interview with RT, Syrian President Bashar Assad said it is vital for Syria to expel US troops from its territory. He said the first option would be to get the US to agree to leave, but said Syria was “going to resort to liberating those areas by force” if necessary. 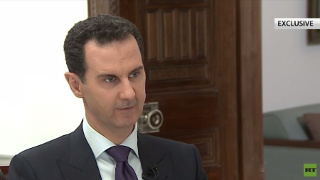 “They have to learn the lesson. Iraq is no exception, and Syria is no exception. People will not accept foreigners in this region anymore,” Assad added. Syria never authorized a US military presence in their country, but the Pentagon has indicated they intend to keep troops there over the long-term.

At present, all US troops in Syria are within territory held by the Kurdish YPG. The Kurds style this region as semi-autonomous, though they never finished negotiating the details of that autonomy with the central government. The Syrian government and YPG have had a tense relationship, though only rarely have they fought directly.

Syria’s army, depleted from years of war, is unlikely to be able to expel even the small number of US troops in the country as a practical matter. Still, Assad has made this a long-term priority for his government, and that greatly complicates the Pentagon’s plans to stay.

21 thoughts on “Assad: Syria Must Get Rid of US Troops, by Force if Necessary”