Russian Deputy FM Mikhail Bogdanov announced Tuesday that officials from the US, Russia, and Jordan will be meeting soon to discuss the situation in southern Syria, and in particular the fate of the “de-escalation” zone in the area. 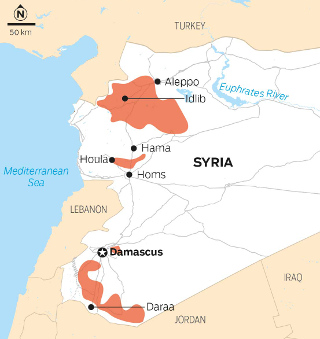 Russian officials are arguing that only Syrian government forces should be in the country’s south. Jordan has said they are confident that a deal will be reached to avoid any sort of unnecessary escalations in the south.

The de-escalation zones were initially meant to keep rival factions from engaging in endless fights to the detriment of the civilian populations in the area. With Syria having mopped up the rebels around Damascus, they are keep to expand this control to the southern border with Jordan and Israel, and if they did so, the zone would no longer serve any purpose.

On the other hand, the US backed the de-escalation zones specifically to protect the rebels from suffering such losses. They are likely to argue that the zones are giving an unfair advantage to the Syrian military by limiting the number of ongoing battles they have to face at one time.

6 thoughts on “Russia, US, and Jordan to Meet on South Syria De-Escalation”