A group of US officials are in the DMZ truce village of Panmunjom this weekend, meeting with North Korean officials about the possibility of salvaging a summit between President Trump  and Kim Jong-un. Trump cancelled the summit last week. 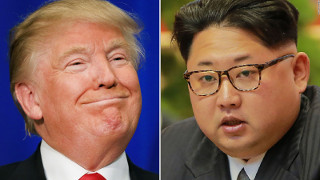 Disappointment over the abrupt cancellation led to a surprise second inter-Korean summit between Kim and South Korea’s President Moon. US officials are now saying that the summit may yet happen, and there’ve even been indications that it might yet happen on the scheduled June 12 date.

President Trump was upbeat in his own comments about the situation, terming talks on salvaging the summit as “going along very well.” Trump has also said that he appreciates North Korea’s calm reaction to his cancellation.

South Korea’s Moon has been pushing hard for Trump and Kim to meet, saying he believes that there are certain issues they aren’t going to be able to settle without a face-to-face meeting and direct talks. Trump has insisted he remains determined to reach a denuclearizaiton deal with North Korea, which presumably is going to mean talks at some point.