Pro-Saudi forces in Yemen have seized the al-Duraihami District on Sunday, the latest in a series of districts taken in an offensive whose ultimate goal is to capture the port city of Hodeidah. Hodeidah is the lone port city for the rebel Houthi movement, and subsequently the only sea route for humanitarian aid for millions of people. 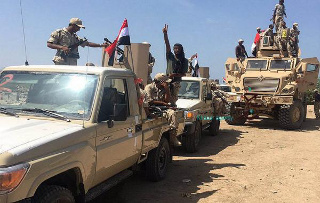 Dozen were killed in the last day of fighting in Duraihami, with  pro-Saudi officials claiming 150 or more were killed in the past four days. The Houthi-allied fighters ultimately were forced to flee, and reportedly left behind a number of weapons.

The offensive against Hodeidah is intended to end a protracted stalemate in the Saudi invasion, where little of note has changed hands for many months. The fall of Hodeidah would be disastrous for the Houthis, and for civilians, with human rights groups predicting mass starvation if the port falls.

Saudi forces have severely limited humanitarian supplies into regions their allies do not control. Even Hodeidah has struggled to get aid in, as a Saudi naval blockade and intermittent airstrikes against the port itself limit their capacity.