A draft resolution backed by Kuwait and by the Palestinian Authority is headed to the UN Security Council this week, seeking the creation of an international force in the Gaza Strip to prevent further Israeli attacks on the area. 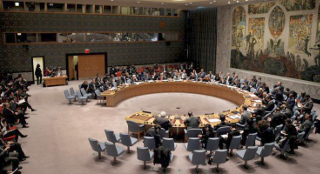 The Security Council resolution likely will have a majority of votes, but the US has signaled that they will veto it. Both the US and Israel are feverishly working to try to kill any support for the resolution. Israeli envoy Danny Danon claims the resolution would be a violation of Israel’s sovereignty, and amounts to a support of war crimes.

The draft is unlikely to die in the Security Council, however, with Palestinian officials saying they intend to advance the matter to the UN General Assembly after a US veto. A General Assembly vote would be non-binding, but still significant.

Earlier this month, the US vetoed a resolution calling for an independent international probe of civilian deaths in the Gaza Strip. The UN Human Rights Council subsequently announced such a probe despite the veto.

Growing international disquiet over the civilian deaths in Gaza seems lost on the US and Israel, who are insisting that not only were the killings legally permissible, but that any questioning of the deaths is tantamount to terrorism itself.

26 thoughts on “Israel, US Try to Block International Force for Gaza Strip”