The count is in from Iraq’s Saturday parliamentary vote, and the results are surprising (complete list here as of 1:00 pm Monday). Iraqi Prime Minister Hayder Abadi’s “Victory Alliance” came in third place, while influential cleric Moqtada al-Sadr’s list won the plurality with a dominant showing in Baghdad. 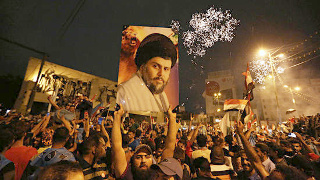 Sadr’s list has 54 seats, a plurality, but is distant from the 165 seats needed for a full majority. The second place group, led by the Badr Brigade’s Hadi al-Amiri, has 47, and Abadi secured 42. Former Prime Minister Nouri al-Maliki’s State of Law party got 25.

None of these groups seems liable to willingly ally with another in forming governments. Abadi opposed militias like the Badr Brigade having political candidates, and he’s a rival to Maliki. Iran and the US are also likely to back everyone who isn’t Sadr.

A grand coalition is also unlikely after the US and Iran set up Maliki at the head of one in 2010. Maliki reneged on all promises of power-sharing, leading to an open rebellion in the Sunni Arab parts of the country.

Getting a true majority in Iraq has always meant getting some support from Sunni Arabs and/or the Kurds. The Kurds are likely to be particularly eager partners for a non-Abadi government this time around, after an ugly military crackdown on Iraqi Kurdistan and massive cuts to Kurdish revenue sharing.

Even then, it’s non-obvious how anyone has a track to majority right now. That’s not uncommon in Iraq, which has a lot of parties to consider. When independent candidates start securing deals, it may become more straightforward.