Rebels in Syria’s Homs Province have agreed to an evacuation and withdrawal deal brokered by the Russian government. The rebels in the area were facing an intense offensive, and agreed under the terms of the deal to hand over all heavy weaponry. 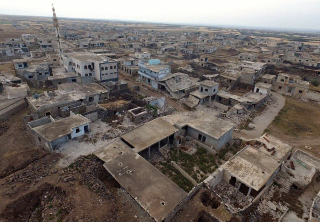 Past deals have mostly seen the rebels sent to Idlib Province. That province, however, is also being pushed into by the Syrian military. In this case, the rebels, and any civilians who want to accompany them, will be headed north into Turkish-occupied northern Syria.

Agreeing to give up heavy weapons on the way out of a region is unusual for the rebels. Sending them to Turkish-held territory may, if successful, start to become the new standard, as Turkey is on good terms with many of the Islamist rebels across Syria.

Turkey also has a fairly large amount of Syrian territory, spanning the border from Jarabulus, on the Euphrates River, to the Afrin District. With Turkey vowing to invade more Kurdish territory, this territory is likely to grow further.

The Homs enclave being evacuated is the most populous rebel enclave currently under siege in Syria, and represents another big win for the Syrian government. Evacuation deals have also been reached in areas further south, as Syria retakes growing amounts of the country from the once strong rebellion.