With just weeks remaining before President Trump’s May 12 ultimatum to change the Iran nuclear deal, there is little sign major change is coming. This is raising concerns that the president may attempt to blow up the deal outright, as he has long threatened. 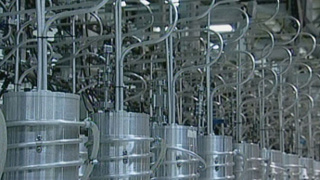 Iran is warning against such a move, saying that they are prepared to ‘vigorously‘ resume their enrichment of uranium if the pact collapses. Iran FM Javad Zarif noted that Iran was never seeking a nuclear bomb, but that enrichment to lower levels would probably be stepped up in the fact of the deal falling apart.

That’s unsurprising. Dramatic curbs to enrichment were a big concession made by Iran under the deal, along with giving the IAEA an unprecedented level of access to their nuclear sites. Without the deal, Iran would likely feel obliged to reverse those concessions.

France, Britain, and Germany have been trying to come up with a side deal with the US to salvage the deal. French President Emmanuel Macron urged the US to stay in the pact in comments on Sunday, warning there is no better option, and no “Plan B” available.