Inspectors from the Organization for the Prohibition of Chemical Weapons (OPCW) have issued a statement confirming that they successfully visited the Douma and taken samples from the site of the alleged April 7 chemical attack. 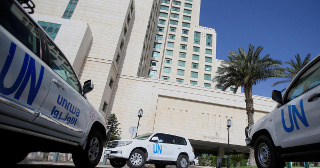 Officials did not provide a timetable for results, but have said it is possible a second visit to Douma could happen if they need additional samples. The inspectors had sought visits all of last week, but the UN Department of Safety and Security (UNDSS) blocked that, citing security concerns.

Despite the OPCW being kept out all week, Western journalists from several outlets managed to visit without issue. CBS and AFP reporters managed to get to Douma readily, while CNN bizarrely got a reporter into the sites to inspect, and sniff, evidence.

The US, Britain, and France all seem to anticipate the OPCW probe not going their way. Each made claims over the course of the last week that Syrians and Russians were “tampering” with the site. They also claimed the Russians were responsible for the delays to the OPCW.

That was never true. The OPCW confirmed that the only obstacle to visiting Douma over the past week was the UNDSS. Experts are also dismissing the tampering claims, saying there is no reason to think that evidence even could be removed if the site happened.

And there are plenty of reasons to doubt it didn’t. A number of reporters visiting Douma found locals dismissing the claims. It is entirely possible the death toll was the result of conventional airstrikes, and no chemicals were used.

In the meantime, spurious claims about what happened continue to circulate, including media claims the OPCW is looking for “nerve agents,” even though no official has ever even alleged that any such thing was used.

Since the US, France, and Britain already attacked Syria on April 13 over the Douma allegations, they are probably not looking forward to the results. Anything that challenges their allegations is likely to be dismissed as in some way flawed, or indicative of a coverup, despite experts saying such a coverup would be physically impossible.