Months of diplomatic progress with North Korea has really picked up pace in recent weeks. An historic moment is set for this Friday, when South Korea’s President Moon has a summit with Kim Jong-un. Ending the Korean War, 68 years after it started, is under serious consideration. 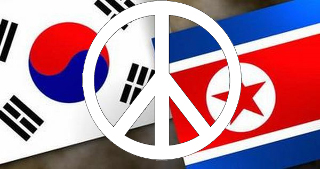 And that’s just the start of the reasons for optimism. A hotline between North and South Korea opened last Friday. The US is considering opening an embassy in Pyongyang. President Trump will also be having his own summit with Kim in late May or early June.

North Korea has made numerous significant concessions. They’ve halted missile and nuclear testing and are in the process of closing their nuclear testing site. Most significantly, they are open to a deal to denuclearize the Korean Peninsula without demanding 30,000 US troops withdraw from South Korea.

President Trump praised North Korea’s moves, and while confirming a “long way” to go before finalizing a deal, gave an upbeat assessment. Not everyone is pleased with the prospect of peace in Korea. A number of major media outlets are trying to find cold war to throw on the proceedings.

That’s easier said than done. All the very meaningful deals and announcements of the last four months adds up to a lot. That Reuters managed to find three South Koreans and one Japanese person who were skeptical means comparatively little. That they’re going to such great lengths to put a negative spin on the talks at all, however, may be much more important.

The Washington Post is also looking for reasons to be suspicious about North Korea’s promises. The New York Times is trying to portray China as an obstacle to progress on a deal. They further cited unnamed US and South Korean officials as believing North Korea’s peace overtures were a trick to get big concessions out of them. Even the Associated Press chimed in with a list of diplomatic efforts that have failed.

68 years of war in North Korea has a lot of momentum behind it. Instead of allowing that status quo to be threatened, establishment press figures seek to derail the effort quickly.