French President Emmanuel Macron is feverishly backpedaling Monday on his claims only a day prior that he had personally convinced President Trump to keep US troops in Syria. The White House has already denied this claim. 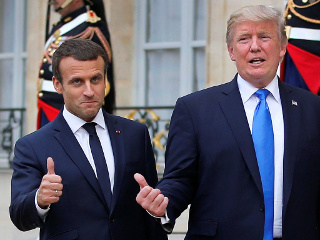 Now Macron is claiming he never meant to suggest he’d changed US policy, but rather that he and President Trump had seen eye-to-eye on Syria all along. He added that they both agree that US troops need to stay in Syria for “the long term.”

This isn’t a good story either. President Trump is still reported to want to withdraw the troops from Syria, even if he’s become resigned to keeping them in the country for the time being. Trump is said to have only agreed because of intense Pentagon pressure.

Macron was trying to brag about his influence in the wake of France participating in US-led attacks on Syria. He overstepped, because Trump’s reluctance to stay in Syria is well-documented. As a result of Macron’s claims, Trump received a lot of criticism and the White House would never want to admit a foreign leader had changed US foreign policy.2