The Syrian Observatory for Human Rights has issued a statement on last week’s US-led coalition attack on Syria which backs up Russian assessments that the majority of the missiles were intercepted by Syrian air defense. The Observatory put the figure at 65 out of 105 missiles intercepted. 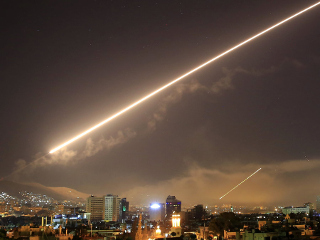 While there were reports of missile interceptions within minutes after Friday night’s US-led attack on Syria, the exact number has been heavily contested. Syrian state media reported 13 initially, but the figure continued to rise. Meanwhile, the US claimed zero missiles were intercepted.

65 out of 105 would be a remarkable feat, considering these are missiles, and considering the Russians did not use the advanced S-400 in any of the interceptions. That said, the US claim of 0 was never very credible, as video footage purporting to show interceptions was readily available the first night.

In addition to Syria’s S-200 and S-125 systems, mostly designed as anti-aircraft systems, Syria used 2K12 Kub systems, as well as 9k317E Buk missiles, shorter range designs meant to counter missiles and smart bombs. They appear to have been quite successful in doing so.

There are still not good figures on casualties from the attacks, but they would’ve been much larger had nearly two-thirds of the missiles not been intercepted. The US clearly would be interested in downplaying interceptions, but if the anti-Assad Syrian Observatory is making similar claims,  it will be difficult to maintain that narrative.