US Ambassador to the United Nations Nikki Haley announced Sunday that the US troops in Syria will not be leaving the country until all their military goals are accomplished. Those goals no longer seem to begin and end with ISIS. 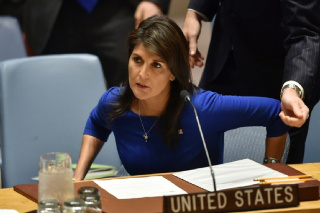 Haley says the US military priority in Syria is to ensure Iran doesn’t “take over” the country, suggesting US troops would be a deterrent to that. There is little doubt Syrian President Bashar al-Assad, an Iranian ally, will survive this war. However, Haley ruled out any direct talks with Assad. She argued Assad isn’t “worthy” of talks.

That’s a problem if President Trump’s previous goal of leaving Syria is ever to be realized. The Administration are setting out a goal that would need to be negotiated and ruling out negotiation. The hope would be in a sudden shift toward diplomacy, as happened with North Korea.

The entire cabinet favored keeping US troops in Syria in an open-ended way, and France’s government echoes that sentiment. French President Emmanuel Macron on Sunday even claimed credit for convincing Trump to keep troops in Syria.

British PM Theresa May has tried to spin the strikes in Syria as being about Russia. This shows that Syria’s attackers are not united on intents and goal.

Macron added that the US strikes would show Russia that the West isn’t “weak.”

39 thoughts on “Haley Says US Troops Not Leaving Syria; Rules Out Talks With Assad”