President Donald Trump is backing away from a threatened imminent attack on Syria. This comes just a day after he told the Russian military to “get ready” because US missiles will be coming at Syria. Suggestions earlier in the week were that the attack could happen any day. 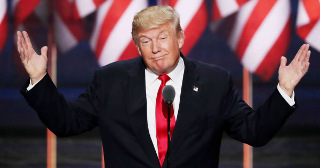 Trump now only says that a decision will be made “fairly soon.” He argued that yesterday’s “get ready” Tweet never said when the attack would happen, saying in a new Tweet it “could be very soon or not so soon at all!” He also expressed anger in the Tweet that no one had thanked him for ridding the region of ISIS.

Secretary of Defense James Mattis also went out of his way to downplay the chances of an imminent strike. Mattis told the House Armed Services committee that the decision to attack had to be balanced against the risk of a new war escalating out of control.

The sudden level of awareness about the war they were itching to start just a day prior isn’t being officially explained. Instead, Trump et al are all suggesting that the several days of very public talk of a new war never happened at all.

In reality, reports suggest that the White House has been inundated with phone calls over the possible attack on Syria, and that those phone calls were overwhelmingly opposed to the idea. Though the Administration is unlikely to admit to being swayed by public opinion, the rapid shift shows it is having a palpable effect on them.

Which isn’t to say that the threat of war has been beaten back entirely at this point. Those wishing to call the White House to express opposition to the Syrian War can do so at 202-456-1414. Indications are that there is a significant wait time because of all the calls pouring in. It is well worth waiting, however, given the potentially disastrous consequences of another American war in Syria.

103 thoughts on “Trump Backing Away From Attack on Syria”