Inspectors from the Organization for the Prohibition of Chemical Weapons (OPCW) are headed to Douma, Syria, to investigate an alleged gas attack there. The attack was claimed to have happened Saturday, though no real evidence has yet been made public, and Syria is denying it. 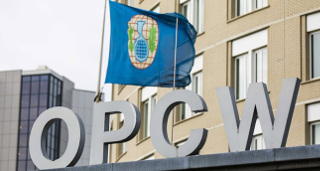 Russian military police have been at the site in recent days securing it, and say the city is under full government control. This should make it easy for the OPCW to access the site, as both Russia and Syria have loudly backed the probe, believing it will vindicate them in claiming that the strike never happened.

Western officials have accused Syria of being behind the alleged attack, and the US tried to push a UN Security Council resolution blaming Syria. This was vetoed by Russia, and a Russian resolution calling for an investigation failed because of opposition from the US and its allies.

Thus, the OPCW is likely the only international body that will ever investigate the matter. French President Emmanuel Macron has insisted that he already has “proof” of Syria’s guilt, but this has not been made public, and US officials have insisted they haven’t drawn a conclusion themselves.

Interest in drawing a conclusion seems to have slowed a bit,with some US officials now concerned that an attack on Syria could start a US war against Russia. Still, if OPCW’s findings are as Syria and Russia appear to believe, the whole war will be derailed before it gets started. US officials have suggested they are loathe to wait for that.

Beyond the concern about a US attack leading to a major war, Syria also expressed concern abot the West obstructing the OPCW probe, saying they would fully blame them if the probe is prevented in any way.