President Trump’s early Wednesday Twitter barrage, including telling Russia to “get ready” for the missiles that he’ll soon be ordering fired, is raising a lot of eyebrows. Russia, however, is shrugging it off, admonishing the US president and saying that Russia doesn’t do “Twitter diplomacy.” 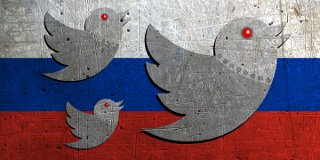 A statement from Russian spokesman Dmitry Peskov warned the US against threatening an “already fragile situation” in Syria, saying that the nations need to take a more serious approach. Peskov added that Russia believes the US invented the chemical weapons allegations to try to justify attacks in Syria.

During his Twitter comments Trump both went after Russia and lamented the poor shape of US-Russia relations. The situation seems set to get worse, however, with Secretary of State nominee Mike Pompeo planning to tell the Senate that the US “soft” policy toward Russia is now over.

Pompeo is said to also intend to declare Russia “a danger to our country.” This comes after Ambassador Nikki Haley bragged that Trump is the most anti-Russia president since Ronald Reagan. Pompeo’s comments suggest this is only going to get worse.

The most troubling part of this is that Trump himself conceded on Twitter that relations are the worst in history, saying they’re even worse than the Cold War. Given how often the Cold War threatened to turn into World War 3, the administration seems remarkably contented to keep throwing fuel on the fire.