A UN Security Council resolution proposed by Russia has been voted down, with Western nations fighting against it. The resolution would’ve called for a formal investigation into the alleged Syrian chemical weapons attack on Saturday. 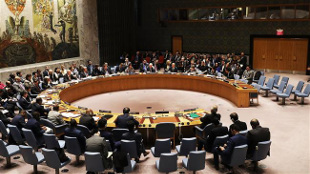 The US had offered the first resolution, which aimed to blame Syria for the incident, but this was vetoed by Russia. US Ambassador Nikki Haley said the resolution blaming Syria was the “least” the UN could do. There is as yet no public proof the attack even happened.

An actual investigation becomes risky, then, because the results aren’t a foregone conclusion. This doubtless informed the US and other nations’ resistance to the Russian resolution, though simply rejecting the resolution out of spite for Russia vetoing theirs was probably also a factor.

The Organization for the Prohibition of Chemical Weapons (OPCW) is already conducting their own inquiry into the incident. The US and its allies are expected to take any military actions against Syria before the OPCW can finish their inquiry, to prevent a result that rejects the allegation from derailing their planned operations