Amid growing concerns about mass starvation and lack of medical aid, the UN appears to be backing the Saudi blockade against northern Yemen, announcing they are adding a handful of additional “inspectors” to rummage through the cargo of aid ships trying to reach the coast. 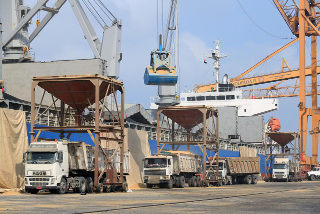 The Saudis are nominally blocking northern Yemen to prevent arms smuggling, though in practice the only arms their blockading ships have come up with were from boarded ships that insisted they weren’t headed to Yemen in the first place. The UN says they won’t inspect any ships heading to ports controlled by pro-Saudi forces.

Which is what the blockade really is, a punitive measure against civilians in the rebel territory. Lack of medicine has killed huge numbers of civilians in northern Yemen, pausing several crises. Millions are facing malnutrition, and potential starvation.

The WHO admitted as much, saying that there are thousands of pallets of aid waiting to be sent to northern Yemen. With 10-UN inspectors, it’s going to take quite some time  for any of it to get there.